Log in here to manage the Web Contents. If you are unable to access, please check your keyboard carefully and try again or go through according to the user guideline. This System is Designed, Developed and Maintained by support@techcott.com

This is What We Do 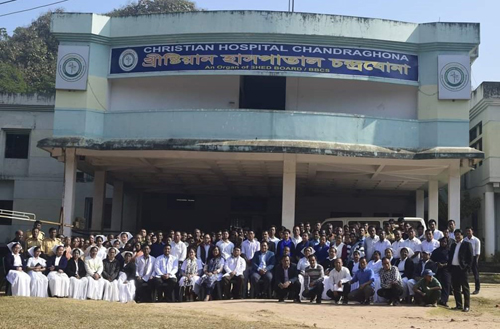 Christian Hospital Chandraghona (CHC) is situated 45km north-east of Chittagong city, in the administrative area (upazila) of Kaptai within Rangamati Hill District, Bangladesh. This hospital was established in 1907, by the Baptist Missionary Society, U.K. It started as a small health centre, initially providing clinic based primary health care and slowly grew into the main referral centre for the whole of Chittagong Hill Tracts (CHT) and also part of neighbouring upazilas of Chittagong District. CHC has been working in both curative and preventive health, and has been rewarded by strong confidence and acceptance of its service from the whole population of CHT especially the tribal groups. The hospital is fully-staffed and has a new hospital building, which includes all basic and essential medical, surgical, obstetric and paediatric facilities.

Christian Hospital Chandraghona (CHC) is registered under the Social Health and Education Board of the Bangladesh Baptist Church Shanga. 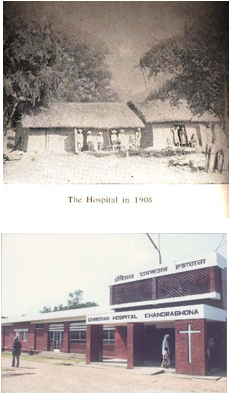 The medical work in Chandraghona started in the year 1907. Dr. George Orissa Taylor was the first doctor to work in Chandraghona. He was a young Baptist house surgeon, son of India missionaries, and had specially trained with a view to medical mission service. He was sent to Chittagong Hill Tracts by the Baptist Missionary Society (BMS), UK.

In 1907, the small dispensary, a two room mud hut erected earlier in the valley below the bungalow, was to act as a temporary hospital while foundations were laid for a new red brick hospital. Cheered and encouraged by the financial help of the Commissioner of Chittagong and the Superintendent of the Hill Tracts, they set to with great enthusiasm to complete the building.

In 1998 construction of a new hospital began replacing the 90 year old structure which became unsafe to use. With the financial assistance of EED of Germany and ICCO of The Netherlands, work on the new hospital started and was completed in 2002 in three phases. The new hospital building was opened on 3rd January 2003.

Now in 2017/18 we face fresh challenges. Along with the development of the building from the hut to a three storied solid structure, work and technology has expanded. The number of staff has also increased. So too has the rate of change and the demands of the outside world. It has been a long journey since 1907. There were many difficult times but God's work never stopped. It is continuing now and will continue in the future, whatever may lie ahead.

For a fuller description of the history of CHC see the History Book which was compiled by Marjorie MacVicar for our Centenary Celebrations, and includes contributions from many who have served in CHC over the years, and Extracts from “Early Days in the Chittagong Hill Tracts” from the treatise by Dr G.O.Teichman.

"Heal the sick, cleanse the lepers. Freely you have received, freely give." (Matthew 10:8)

Christian Hospital Chandraghona is built on the strong foundations of the Christian Church and the teachings of Jesus Christ. From its creation in 1907 by Dr Taylor, a missionary of the Baptist Missionary Society, through more than 100 years of healing and caring in the name of Our Lord, to its current place as one of the major institutions within the Bangladesh Baptist Sangha, CHC has endeavored to deliver health care and support not only to the bodies but to the souls of the people it serves.

There are currently 2 places of worship at CHC – Chandraghona Church which is situated just behind the hospital and is attended by staff and other Christians in the area, and the smaller Leprosy Church beside the Leprosy Hospital which was relocated to its present position in 1965. Both hold regular services of worship on Sundays and other Christian special occasions.

A new Hospital Chapel within the General Hospital will be completed in the near future and will offer a quiet place of peace and meditation for people of all religions at any time. Students and staff participate in regular daily prayer meetings, weekly bible study classes, and other Christian activities throughout the year, and there is also a youth group and a women’s group which meet regularly.

CHC has overcome many challenges in the past, and will face more in the future as it strives to maintain high-quality, modern health services to the poor and sick of the CHT. But we must never forget that without faith in God, nothing would be possible. CHC is dedicated to following the example of Our Lord Jesus Christ, remembering always the health of the soul as well as the body.

"It is Jesus' name and the faith that comes through him that has given this complete healing to him." (Acts 3:16) 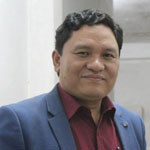 CHC has been here for the people of the Chittagong Hill Tracts for more than 100 years. I deeply honour the many people, especially the missionaries from BMS, who have dedicated their lives to serve the people in this remote place. One can only imagine how isolated it was for them, not only in the early nineties but, (considering the sometimes turbulent history of this place) even in the more recent past. CHC still offers quality services especially for the poor and ultra-poor, not only in the hospital but also to the communities directly. Without God’s help, great teamwork and prayers from our friends all over the world, this would not be possible. There is so much more we at CHC would like to offer, but our resources are limited. We need help from everyone to provide more services and allow us to reach out to more needy people. I am grateful to all the individuals and donor organisations who give generously of their time and money to allow us to carry out the work we do here. 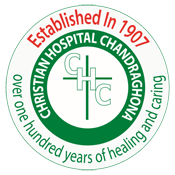 We hope this website will give you more information about our location, our work and the people we serve. Please be with us & let us lightning you ...